We’ve tested out these pliers with a multitude of prong settings and have broken down the three easy steps to setting a stone. The pliers work great on both pre-notched facet stone settings and un-notched cabochon settings, but we will use a faceted stone in the example that follows. 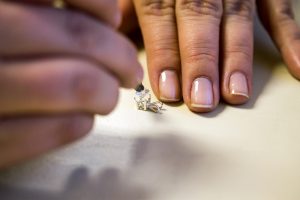 Using tweezers or fine tipped pliers, place the stone between the prongs. When you have situated it, make sure it is resting on all of the pre-notched grooves in the prongs and the stone itself is lying flat.

Tip: Use a small piece of wax on the end of a q-tip or toothpick to help maneuver the stone. It keeps your fingers out of the way so you can see what you’re doing and the wax wipes right off the table of the gemstone. 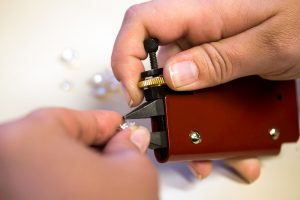 While holding the tool in your palm, use your thumb and forefinger to adjust the setting until it is resting with the lower jaw on the bottom of the setting and the top jaw on a prong.

Practice first! Open and close the prongs several times to get used to them. It is critical that you do not squeeze the lever while you are making the adjustments. This will cause the jaws to depress before you are prepared to close the prongs, at that point the pliers will open too wide to be used. 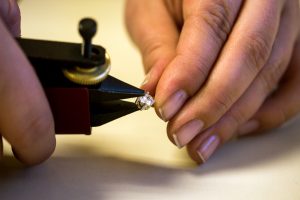 Squeeze the lever to close your first prong. For your second prong close the one that sits opposite from it. Keep doing that until all of the prongs have been pushed down. Your stone should be secured so it does not wiggle or twist at all.

Keep the setting at a slight angle because you want only the tips of the jaws touching the metal.